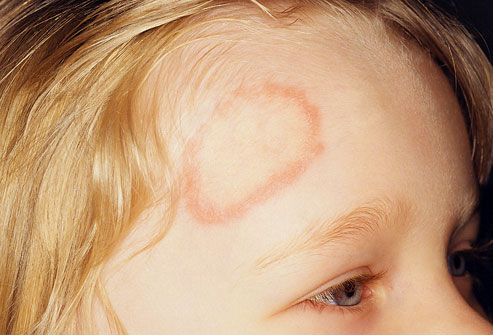 A ringworm diagnoses of Tinea Corporis

How serious is it for you if you get ringworm diagnoses of tinea corporis, tinea capitis, and tinea pedis? While the Latin terms do sound ominous and serious, they’re actually referring to types of skin infections known as ringworm.

Have you got a rather itchy and scaly red rash on your skin? Or perhaps it’s on your scalp or even in your beard area. The rash may also appear between your toes or within the folds of your inner thigh.

Those are all types of ringworm infection. You don’t have to worry all that much, though, because there are cures for ringworm and in the vast majority of cases a treatment of Phytozine will suffice. In a month or so it can be truly gone.

Despite the name, ringworm isn’t actually caused by a worm. It’s actually caused by fungi, and these fungi are microscopic spores that feed on the protein found in skin, hair, and nails. The name makes more sense when you see ringworm pictures, because the rashes look like a worm forming a circle.

When you see the images of ringworm …. Tinea Corporis, Tinea Capitis and Tinea Pedis …. You’ll notice that classifying the type of ringworm relies a lot in where the skin condition appears on your body. Sometimes the treatment for ringworm prescribed by the doctor will depend on what kind of ringworm infection you have.

When the ringworm appears on your body (torso, arms, and legs) it’s called tinea corporis. It can be acute, and appear and spread quickly, or it can be chronic and the mild rash can spread slowly. It may affect the exposed areas, but it may spread from other sites of the body.

This is the type of ringworm that presents the classic ringworm rash.

It’s caused by a fungus, but many different fungi can cause tinea corporis. When the acute tinea corporis results in a red patches that are itchy, inflamed, and sometimes pustular, it may be caused by a type of animal fungus like M. canis, which is the fungus often found in cats and dogs. In farm cattle, the most common fungus is the T. verrucosum.

On the other hand, chronic tinea corporis is most commonly caused by the fungus called T. rubrum (Trichophyton rubrum). Chronic tinea corporis is commonly found in body folds, and when they become widespread through the body they’re more difficult to treat and the chances of reoccurring are greater. This is either because the skin’s natural resistance to the fungus has weakened or because the environment is full of fungal spores.

In New Zealand, the most common fungal cause of ringworm is the T. rubrum. In the Pacific islands and other tropical areas, sometimes the fungal culprit is the T. concentricum, which results in concentric scaly brown rings.

This is what you call a ringworm infection when it attacks the scalp, although it can affect the eyebrows and eyelashes as well. It tends to attack the hair shafts and follicles. As a result, you often see bald spots in the affected areas.

The symptoms of tinea capitis include dry scaling (which is like dandruff but with moth-eaten hair loss), black dots (when the hair is broken off at the scalp surface), smooth bald spots, kerion (an inflamed mass like an abscess), and favus (matted hair and yellow crusts). Sometimes there is only mild scaling, and there may be no symptoms at all. But the carrier of the fungal spores can still infect others.

It’s more common in children than in adults, although it can affect adults too. It’s most common among children ages 3 to 7 years old, and when found in a child even the adults in the family should also be checked for ringworm. It’s also prevalent in crowded living conditions.

The method of infection depends largely on the fungal spore responsible for the ringworm. In the US, one common cause of tinea capitis is the T. tonsurans fungus that naturally infects humans. Because of this, the common infection method is through personal contact between two people (or people sharing infected items or surfaces).

In New Zealand, however, M. canis is the most common fungal source of tinea capitis. This is a fungus that grows naturally on an animal, which is usually an infected kitten. Other fungal carriers include cattle (T. verrucosum), horses (T. mentagrophytes var. equinum), and pigs (M. nanum).

This one should be more familiar for you, because the term tinea pedis is just a fancy medical term for the pedestrian affliction known more as athlete’s foot. It’s usually caused by T. rubrum, which originated in the tropical areas in the Pacific.

Interestingly enough, the Asian people there didn’t get athlete’s foot until they began to wear shoes because of the colonization. When the colonizers went back to Europe, they brought the fungus there and it spread to the US. It’s because of this colonization and the popularity of wearing shoes which have made the T. rubrum the most prevalent ringworm-causing fungus in the world today.

Again, you treat this type of ringworm with an antifungal cream such as Phytozine. You need to make sure that you keep the areas between your toes dry at all times, and you should change your socks daily. And don’t even think about lending or borrowing socks.